What Happens When Asbestos is Inhaled?

What is Asbestos?
How Does Asbestos Cause Mesothelioma?
What Happens when Asbestos is Inhaled?
The Dangers of Asbestos
Other Asbestos Diseases
Asbestos and Work Related Exposure
Asbestos and the EPA

The overall purpose of breathing is to deliver oxygen to your body through inhalation and expel carbon dioxide from your body through exhalation.  This is performed by the respiratory system: with each inhalation, air will first travel through the inhalation cavities of the nose and mouth and then to the pharynx, larynx, trachea, bronchi and bronchial divisions.  While we often associate the term “air” with oxygen, air actually consists of numerous gases and can also contain many harmful particles.  To prevent the harmful particles from entering the body during inhalation, the respiratory system consists of numerous filtering systems.  These range from the mucus of the nose which captures larger particles to the lining of the lungs which traps small particles.

In most cases, the respiratory system is very effective in filtering out harmful components in air.  However, if the harmful components in the air are very small, then the respiratory may not be able to effectively filter them out and they can become embedded in the body.  Particles which are less than five micrometers in diameter (five millionths of a meter) can make it to the innermost parts of the lungs – the alveoli.  Because asbestos fibers are typically smaller than two micrometers in diameter, they are particularly likely to bypass the respiratory system’s filtration system.  Some forms of asbestos, such as crocidolite, are extremely small at about 0.1 micrometer or less.  Because they also have a thin, straight shape, they can easily pass through the lungs’ filtration and reach the alveoli. Other types of asbestos fibers, such as chrysotile, have spiral shapes. This causes them to stick to the bronchi divisions and then be propelled upwards with mucus to the throat. 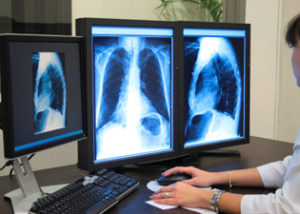 The final possible course of asbestos fibers which have entered the body is that they are left alone by the body’s various mechanisms.  Asbestos fibers can stay in a body for decades without having any evident adverse effects.

Asbestos fibers are thought to be physical rather than chemical carcinogens, meaning that they likely cause cancer by mechanical damages or disruption of normal cell activity.2  While there is still no agreed-upon explanation of how asbestos fibers cause cancer, there are two leading theories:

Asbestos fibers can also cause areas of “pleural plaque” to form in the chest cavity.  The plaques are thickened areas of tissue which hinder respiratory function and can make breathing very painful. There is also ample evidence that asbestos fibers can lead to other forms of cancer such as lung, gastro-intestinal, larynx, and bowel cancer.

It is important to realize that asbestos exposure does not necessarily mean that an asbestos-related disease will occur.  While it is possible for one sole asbestos fiber to lead to a serious illness such as mesothelioma, asbestos diseases are most often caused by continuous exposure to asbestos. Regardless, people who know that they have been exposed to asbestos should take cautions such as informing their doctors about the exposure and being on the lookout for symptoms of asbestos diseases.  Exposure can even come from asbestos accessories like patch drywall though a current study indicates that the limited exposure through these products does not lead to mesothelioma.3  However, one thing remains certain – people who have been exposed to asbestos should avoid other possible cancer triggers – such as smoking – as this can increase the likelihood of mesothelioma.